Kyle Wooten assumedly was an Appalachian harmonica player of the late twenties and early thirties who appeared to have recorded in Atlanta on December 1, 1930 for O'keh.
Well, and this is pretty much all I know about him...

Fortunately, there still are quite a few recordings around so in order to learn about him one at least can examine his style. The most popular of his tunes is certainly "Choking the Blues", employing the draw bending technique which back then was often referred to as "choking the reed" or "choking the harp".
Up until then, most of the 1920's harmonica players had played stricktly straight harp, predominantly blowing the harp in it's original key. Therefore, the likes of Wooten practically paved the way to second position cross harp playing, which would quickly develop into the harmonica blues as we know it today.

Kyle Wooten's very original and witty ways of changing percussive rhythms still make him one of my favorite players.
Enough said, now go check him out yourself!

Henry Whitter (1892 - 1941) from Grayson County, Virginia, was one of the earliest folk & country harmonica players known.

Having picked up the guitar at a very young age he later on added the fiddle, banjo, harmonica and piano to his repertoire. In 1923 he decided to quit his job at the "Fries Washington"Cotton Mill and go to NYC in order to persue his musical career. Although his two test recordings could not convince the A&R in the first place, he ended up getting signed by O'keh Records in late '23. His solo recordings, featuring "The Wreck of the Old 97" which later was covered by Vernon Dalhart to become the first million-seller in record history, were released in January 1924 and were quite successful. 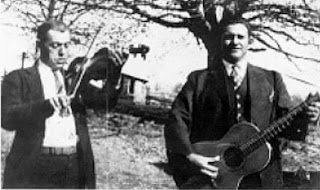 Especially Whitter's fox chase technique pretty much set the bar for this style and did influence countless successors up until today.

This most famous of his solo harmonica pieces he recorded twice, once in 1923 and again in August 1927, and many of his harmonica works are variations of this particular pattern.

Also, there is more to be found amongst the Honkingduck78s:

Where Have You been so Long

If you are into pre war harp and have read this blog carefully for the last few months you might have heard about NC harmonica player Francum "Picollo" Braswell before.

From today on his masterly playing can get associated with a face finally, thanks to the kind help of his grandaughter Stark!

So may I present to you: Mister James Francum Braswell Sr. 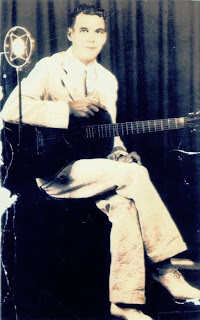 As I usually do on my YouTube channel I also put together a little educational video about him, including one of his only two known recordings:
maz
Posted by maz at 9:10 AM 5 comments:

This is just a short update on Joe's repertoire.
He'd been playing lots of pre war tunes on his two albums plus there's a whole lot more on "History of the Blues Harmonica" featuring Dave Barrett, Dennis Gruenling & Kinya Pollard.
However, here's a tune you may not have heard before - "Harmonica Rag", an incredibly jazzy tune originally performed by Chuck Darling in 1930 - please enjoy!

David McCarn was born in 1905 in Gaston County, North Carolina. In 1917, at the age of twelve, McCarn began working as a doffer at the Chronical Mill in nearby Belmont, and spent much of the 1920s and 1930s working at a succession of textile mills in and around Gastonia. In order to at least temporarily escape the depressing factory work, McCarn began rambling at an early age and kept doing so for much of the rest of his life. Being a part-time hobo he developed a deeper interest in music and so he picked up the harmonica and even taught himself some rudimentary guitar chords. His harmonica technique was strongly influenced by his work mate Gwen Foster, who taught Dave to blow harp in those days' very common 1st position ragtime style. 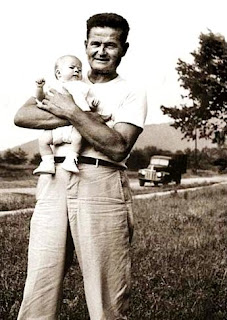 At an age of 21, Dave McCarn wrote "Cotton Mill Colic", a very pessimistic song that got recorded in 1930. It's about the work and living conditions of cotton mill employees which pretty much tells everything about his personal viewpoint on his workplace. Folkarchive.de's got the lyrics - for those willing to have another look at 'em. Later he formed the Yellow Jackets - the band's only song I know of so far, "Huskin' Bee", is to be found on the "Black and White Hillbilly Music"-sampler (in case you know where to find some more pls comment!) on the TRI Trikont label. In May 1931 McCarn made another four recordings and this time he had his friend Howard Long (1905-1975), a working collegue and also Yellow Jackets band member, accompanying him on guitar. Amongst these was "Bay Rum Blues" - a quite twisted description of a beaverage made from this popular hair tonic and aftershave lotion. They also made a re-recording of "Cotton Mill Colic", named "Serves 'em fine" - this time with slightly different lyrics and applying harmonica. Although these recordings didn't quite sell those days we can be lucky to still being able to listen to McCarn's heritage as an excellent harmonica player, but also as a critically thoughtful and yet very humorous person. David McCarn died on November 7, 1964, of aspirated pneumonia, resulting from cirrhosis of the liver, at the age of fifty-nine. Here's all the legal cuts I found which are relevant from a harmonica player's perspective:

Eddie Mapp, who was born around 1910, could have had the brightest future as a harmonica player one can imagine - if he hadn't been stabbed to death at a tracically young age of 20 years only.

It is said that he'd been performing in the streets of his hometown Atlanta, Georgia since he was 12 years old. That's where he met guitar player Curley Weaver and together they'd been playing barn dances and festivities of any kind around the area. At times Barbecue Bob and his brother Charlie would join them too.
Mapp and Weaver, together with Robert Hicks, Slim Barton and James Moore, formed the Georgia Cotton Pickers and got to record quite a few tunes fortunately. Most of these can be found on "Georgia Blues 1928-1933".

The only solo piece Mapp got to record was "Riding the Blinds" (1929), a driving and highly complex piece following a fox chase-like rhythm, as nicely performed by Rob Mason here:

Since Mapp's technique and style of playing seems so incredibly advanced for a kid his age, there have always been rumors about him being older than his birth certificate stated.
Well, we'll never find out but what we do know is that he was a heck of a harmonica player - and that is for sure!
Posted by maz at 2:59 AM No comments:

For countless years Adam Sikora is an institution to Berlin's Blues Scene now. Strongly influenced by the likes of Sonny Terry, Johnny Woods and Sonny Boy Williamson his style certainly does comprise these greats' techniques (as to be heard in the following):

However Sikora, in cooperation with Simon "Lee" Dahl, frequently manages to create an original, extremely powerful and captivating sound. That he does by employing elements of pre war techniques as well as percussive Hill Country Blues. Here's one of the duos' merely classic recordings:
These days Lee & Sikora are to remain some of just a few artists still covering the great 30's & 40's material all over Europe - and as Seasick Steve said: "They doin' it right!".

In December 1973, David Morton recorded the late DeFord Bailey as a Christmas present for his father.
At http://defordbailey.info/audio there are 21 free tracks downloadable
- a must-have for every harp fan!

What is particularly interesting about these recordings are two things: first of all there is DeFord's technique. In comparison to his first recordings, which had been made about 45 years ealier, his sound is way softer and may even sound a bit sloppy to some. There are far less tongue slaps and tricky offbeats and one may hear a toothless breath in between the notes every once in a while...still some darn fine playing for a 73 year old though! 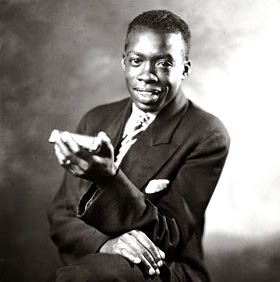 Secondly there are these little sections between the songs where DeFord speaks about all kinda harp related things such as hardware quality as well as clues his technical approach. Go check it out if you haven't done so yet - it's definitely worth it!
"Muscle Shoals Blues"
"Davidson County Blues"
Enjoy!
maz
Posted by maz at 6:22 AM No comments:

James Francum Braswell (1908-1958) was born in 1908, the son of a farm family, in Piney, in Caldwell County, in western North Carolina. By 1920, however, his father and two siblings were working in cotton mill in nearby Lenoir, and although no definitive evidence has surfaced, Braswell himself may have worked in the mills, in either Caldwell or Gaston County. How Braswell and Wade met remains uncertain, nor is it clear how the duo came to audition for Columbia. However, in the fall of 1929, the pair traveled to Johnson City, Tennessee, to record at a field session, supervised by A & R man Frank B. Walker.
There, on October 21, 1929, in a makeshift studio set up in a former cream separator station, Wade and Braswell waxed two vocal duets for Columbia’s “Familiar Tunes, Old and New” series:
Think a Little, a rather secular admonition to uphold the biblical Golden Rule, and When We Go A Courtin’, a comical cautionary tale about the hazards of courting (text taken from Gastonia Gallop's Artist Gallery).

Braswell's harmonica playing is extremely powerful and creative, remarkably close to Gwen Foster's style, employing lots of blowbends and upper octave tongue trills in 1st position on a G. Unfortunately these two cuts appear to be his only known recordings. However he remains to be an important part in the legacy of great Carolina harp players.

Born William Jennings Cox at Eagle, West Virginia in 1897, Bill very soon learned to play the harmonica and later the guitar. From 1927 onwards Cox had a little daily show on Walter Fredericks' local radio station WOBU and so his Dixie Songbird's show quickly became quite popular.
Fredericks also was the guy who convinced Cox in 1929 to finally go to Richmond, Indiana and cut some records to be played on the air when he would fail to appear the show. This was the beginning of Bill Cox's long-term recording career. After covering Jimmie Rodgers songs in the beginning, Cox increasingly developed his very own style performing a variety of older sentimental songs and original compositions, often including comical content from domestic everyday situations.

In 1937 he recorded two songs that have become national country standards, "Filipino Baby" and "Sparkling Brown Eyes". Although it is said that there was no doubt about Cox's authorship of "Filipino Baby", he ended up making very little from it.

In 1965 an amateur folklorist found Cox living in poverty in a tiny shack in a slummy part of Charlston. He then received some financial aids and got to cut his last album before he died in December 1968.